The 3 sons of Noah, being the 3 abilities of your soul

The soul of a man or a woman will prosper, dominate, conquer and becoming a blessing when it finally learns how to relate to these three different dimensions of it’s existence in the earth.

When God created your soul or when He breathed your soul into your body, He deposited in within it these three different abilities that will never be complete until you relate or become connected to the relationships that will fulfil the purpose of your existence on earth.

I repeat what I said; your soul is made up of three different abilities,

The 1st one is Ruach, which means the spirit of God (Holy Spirit).

The 2nd one is called Neshamah, which means breath or soul.

The 3rd one is Naphesh, also meaning body, the five physical senses, desire, self, feelings, lust or appetite.

Notice that in Genesis 2:7 the holy scripture speaks about these three abilities of your soul; And the Lord God formed man of the dust (Naphesh, five physical senses, body, appetite, feelings) and breathed into his nostrils the breath of life (ruach or the Holy Spirit) and man became a living being (Nashamah, breath or soul).

Isaiah 19:23-25 boldly declares the three dimensions of your soul as follows; In that they there will be a highway for Egypt to Assyria and the Assyrians will come into Egypt and the Egyptians into Assyria and the Egyptians will serve with the Assyrians in that day Israel will be one of three with Egypt and Assyria a blessing in the midst of the land, whom the Lord of hosts shall bless saying; blessed is Egypt, My people and Assyria the work of My hands and Israel My inheritance.

Now ! Pay careful attention as I break down  the scripture for you to grasp the prophetic insight.

Noah had three sons, also being the three different abilities hidden in your soul.

The first one being Shem (the soul, the breath in Hebrew meaning Nashamah) also being the descendant of Abraham, the Jews that God gave His commandments through Moses, so that they may connect the heaven and the earth into one as they keep these holy commandments, that were handed down on to them at mount Sinai.

The second one being Ham , the forefathers of Cush, Egypt, the black man, also given the responsibility of prayer on the earth. Black man, created for calling upon God’s Holy Spirit on the earth through prayer. so that the Spirit of God may possess the peoples dream realm or visionalizing ability as the black man continues in prayer (Ruach)

The third one being Japheth, the forefather of the white man, the Assyrians, the ones that God calls the works of His hands, the white man also put in charge of the technology, given the ability of the mind, to build, to design and develop and also to administrate the earth.

Now my point is this. In within your soul there is a strong desire for you to see the earth resembling heaven. In every aspect of it’s existence. That’s why God gave you the Jews, just for that purpose as you relate to the descendants of Abraham, the Jews.

You are also relating to that part of your soul that wants to see heaven revealed on earth.

In within your soul there is also another desire, which desires to see yourself in a world which is developed, well administrated and technologically connected, as you also relate to the white man (Japheth) you are also relating to that part of your soul.

In within your soul there is also this craving desire to see God perform supernatural miracles through the spirit of prophetic utterance that is birthed forth from the place of prayer, as you also relate to the black man, you are also relating your soul to the 3rd dimension of your existence.

That’s why this saying is prophetic and true that when the spiritual relationship which unites these three abilities of the soul comes to it’s maturity, that’s when Hasham (God) is going to rapture his bride (church) that has kept it’s self spotless from a spotted world.

By Apostle A Ngabo 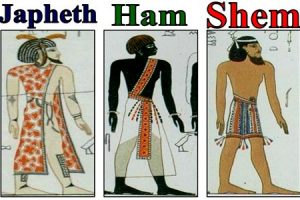 Nimrod; (spirit of Anti Semitism) tries to kill Abraham. In[...]

Nimrod was the first hunter he was consequently the first[...]